How much did a beaver hat cost?

“   Until the period of the Revolution, every person who wore a fur hat had it always of entire beaver. Every apprentice, at receiving his "freedom", received a real beaver at a cost of six dollars. Their every day hats were of wool, and called felts.  What were called roram hats, being fur faced upon wool felts, came into use directly after the peace, and excited much surprise as to the invention. Gentlemen's hats, of entire beaver, universally cost eight dollars.” (4)

The Measuring Worth online inflation calculator suggests that eight dollars in 1785 (taken to be “directly after the peace” of 1783), would be something like $185.00 today. And the six dollars for an apprentice’s graduation gift, a “real beaver” perhaps not of “entire beaver” but surely better than his everyday wool felt hat, would be something like $140.00 today.
BUT WAIT, THERE’S MORE!
Although the Hudson’s Bay Company was much more concerned with the wholesale price of raw furs, they did buy hats to stock their trading posts. I’ve already mentioned woman’s fine beaver hats in 1832, when no men’s hats were included in the inventory. Here is the way the supply of hats that arrived at Fort Vancouver on the supply ship Cowlitz in February1841 appears in Company records: (5) 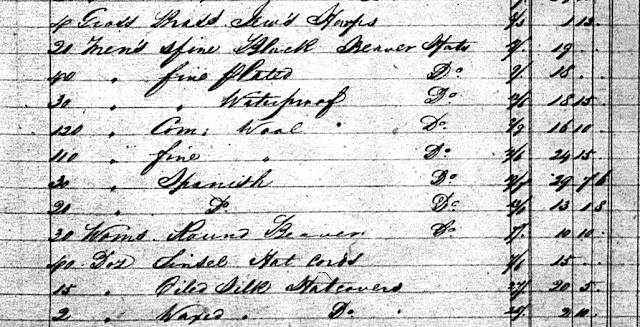 This is the transcription, beginning right after the 4 gross (576) “Brass Jew’s Harps,” with quotation marks and “ditto” expanded:

Followed by 40 doz[en] tinsel hat cords, 15 dozen oiled silk hat covers, and 2 dozen waxed silk hat covers. (Apparently then as now people with nice hats wanted to protect them from the rain.)
This is how these figures roughly translate into wholesale costs and retail prices per hat in today’s US dollars: (6)

There’s a lot to absorb here. One take-away is a solid comparison of the prices of the various types and grades of hats listed. Roughly speaking, a fine beaver hat cost twice as much as a plated hat of wool felt with beaver fur applied to the surface. A fine wool felt hat cost half as much as a plated hat, and a common wool hat, in turn, cost about half as much as a fine wool hat, and only a fraction of the price of a fine beaver hat. There were 230 wool felt hats in this shipment, compared to only 20 fine beaver models. That would seem to be appropriate for the market demand HBC might have expected in 1841, before the influx of wagon-borne American “emigrants” began to arrive in large numbers, at a time when there were relatively few men in the entire Columbia District/Oregon Country who might be looking to acquire a fine beaver hat in any given year--or who could afford one.
For a few more comparisons, in the same 1841 shipment the wholesale cost of a flintlock musket with 3 1/2-foot barrel, HBC’s “common Indian gun,” was 22 shillings, more than a fine beaver hat at 19 shillings. A “dark blue cloth capot with hood” cost the company 21 shillings 6 pence. A 3 ½-point blanket cost the Company 9 shillings 3 pence, and a man’s “flashy flowered silk vest” cost 9 shillings 4 pence, meaning that 2 such blankets or vests were worth basically the same as a fine beaver hat. A “men’s fine cloth jacket” cost 19 shillings 6 pence, slightly more than a fine beaver hat. A pair of “men’s blucher shoes” was 8 shillings 6 pence wholesale. “Men’s grey trousers” cost the Company 13 shillings 6 pence a pair. And so on. If you needed a good hat, as every gentleman did, it was an expense roughly in line with other clothing items (or bed covers) worthy of your status.
As for the “Spanish hats,” the best of which cost more than a fine beaver hat, I speculate that they were wide-brimmed hats of high quality materials and construction, favored by the californios and possibly destined for the HBC’s “California Establishment” at Yerba Buena, the old name for what became San Francisco. If so, they would probably have been traded for a certain number of dried cowhides—but that’s material for a future posting.
(For a little more context: if you search the Internet for “beaver hat prices” you will see that in today’s market a dress fedora or cowboy hat claiming at least some beaver fur in the felt will run you anywhere from around $300 to $800—not counting specialty hats made for the reenactment crowd and those with an itch for a 100% pure beaver hat that absolutely must be scratched.)
If anyone reading this has any other information that might help us pin down the retail prices of beaver (and other types of) hats “back in the day,” I would very much like to receive an email note at tomholloway62(a)gmail.com

NOTES:
(1) An informative overview of the English fur market, hat manufacturing processes, and wholesale marketing strategies is David Corner, “The Tyranny of Fashion: The Case of the Felt-Hatting Trade in the Late Seventeenth and Eighteenth Centuries,” Textile History, 22:2 (Autumn 1991). I thank Dr. James Hanson of the Museum of the Fur Trade for pointing me to this source.

(2) "Fort Vancouver Depot Inventory, 1st June 1832," Hudson’s Bay Company Archives (HBCA), B/223/d/16-40 (microfilm in Fort Vancouver NHS research library). At the 1832 exchange rate between British and US currency, 22 shillings was equal to $5.34 at that point in time. Any calculation of currency inflation (loss of purchasing power) over long periods is only approximate. For one thing, the basket of goods used to measure purchasing power has changed dramatically from 1832 to today. As the economists at Measuring Worth point out HERE, "there is no single 'correct' measure of value over time, and economic historians use one or more different series depending on the context of the question." I use these numbers only as something better than the alternatives, which are a shrug of the shoulders, or a wild guess.

(3) Liza Picard, Dr.Johnson’s London (New York: St. Martin’s Press, 2002), p. 296 in the Appendix listing “cost of living, currency, and prices” during the active professional life of one of the major literary figures of London in the 1760s-70s, Dr. Samuel Johnson (1709-1794), of whom James Boswell wrote the famous biography, Life of Samuel Johnson.

(4) Watson, John F., Annals of Pennsylvania, Vol 1 (1857)
The Table of Contents for this is at:
http://usgwarchives.net/pa/philadelphia/watsontoc.htm
The online version is unpaginated. These quotations are from the following section, Ch. 15-18:
http://files.usgwarchives.net/pa/philadelphia/areahistory/watson0107.txt
I am grateful to Dr. James Hanson of the Museum of the Fur Trade for pointing me to this source.

(5) “Invoice of Goods Received at Fort Vancouver on Barque Cowlitz, February 1841,” HBCA, B/223/d/139 (microfilm in Fort Vancouver NHS research library), I thank Theresa Langford, Curator, and Meagan Huff, Museum Technician/Librarian at Fort Vancouver NHS, for their assistance in providing access to this and other sources available at the site.

(6) The wholesale cost in 2011 dollars is derived by the conversion and inflation calculators at measuringworth.com. Of course such calculations over extended times are rough approximations, but they are better than mere guesses, as explained in THIS ESSAY on the Measuring Worth site or in the FAQ at the bottom of THIS PAGE. The retail price is calculated on the cost+100% markup HBC charged to “Settlers and Missionaries” as well as to the Company’s Commissioned Officers (Chief Factors and Chief Traders) during the winter season. HBC employees of the “servant” category were charged a 50% markup over the company’s wholesale cost. These pricing policies are discussed in John Hussey, “Historic Structures Report” Vol. 1 (1972), p. 190-1, note 17, reproduced in Lester A. Ross, “Fort Vancouver, 1829-1860: A Historical Archaeological Investigation of the Goods Imported and Manufactured by the Hudson’s Bay Company,” (Typescript, Fort Vancouver NHS, 1976), Table 12, p. 150.
Hussey's work and other online sources on Fort Vancouver in the Hudson's Bay Co. era are discussed in THE POSTING which immediately precedes the one you are now reading on historic beaver hat prices.

Click on the triangles and months for older posts

Tom Holloway
I am a retired historian living in Portland, Oregon and volunteer researcher at Fort Vancouver National Historic Site. Any feedback on this blog is welcome, via email to tomholloway62(at)gmail.com